One of the main reasons for drinking coffee. Or not? Some people want to enjoy coffee but for whatever reason can’t have caffeine, so for them, the next best thing is decaf.

But is decaf truly decaffeinated? How much caffeine is there in decaf?

The USDA states that decaffeinated coffee should not have more than 0.10% caffeine. So there is indeed some caffeine left in decaf.

Studies have shown that about 97% of the caffeine is removed. So instead of containing 150mg or so of caffeine, an 8 ounce mug of brewed coffee would have just 3-4mg of caffeine instead.

3 to 4 mg of caffeine on average may not seem like much, but if you drink many cups of coffee per day, it can easily add up.

It should be noted that these are averages and actual measurements will vary from brand to brand and roast to roast.

How is coffee decaffeinated?

To decaffeinate coffee, you have to treat them before they are roasted – while they are still green. There are three methods through which coffee is decaffeinated. All methods have to soak the beans in water first:

In the solvent-based process, chemicals such as methylene chloride, ethyl acetate and water are combined to create a solvent. This solvent pulls the caffeine out of the beans into itself. The solvent evaporates and takes the caffeine with it.

This is a completely organic process. Caffeine is extracted from the coffee beans using osmosis and this is nearly 100% efficient.

Coffee beans build up carbon dioxide as they are roasted. Carbon dioxide can efficiently remove caffeine as it diffuses out of the coffee. This process is efficient but costly.

One major drawback of decaffeinated coffee is that some of the flavours are lost.

Why would you want to avoid caffeine? 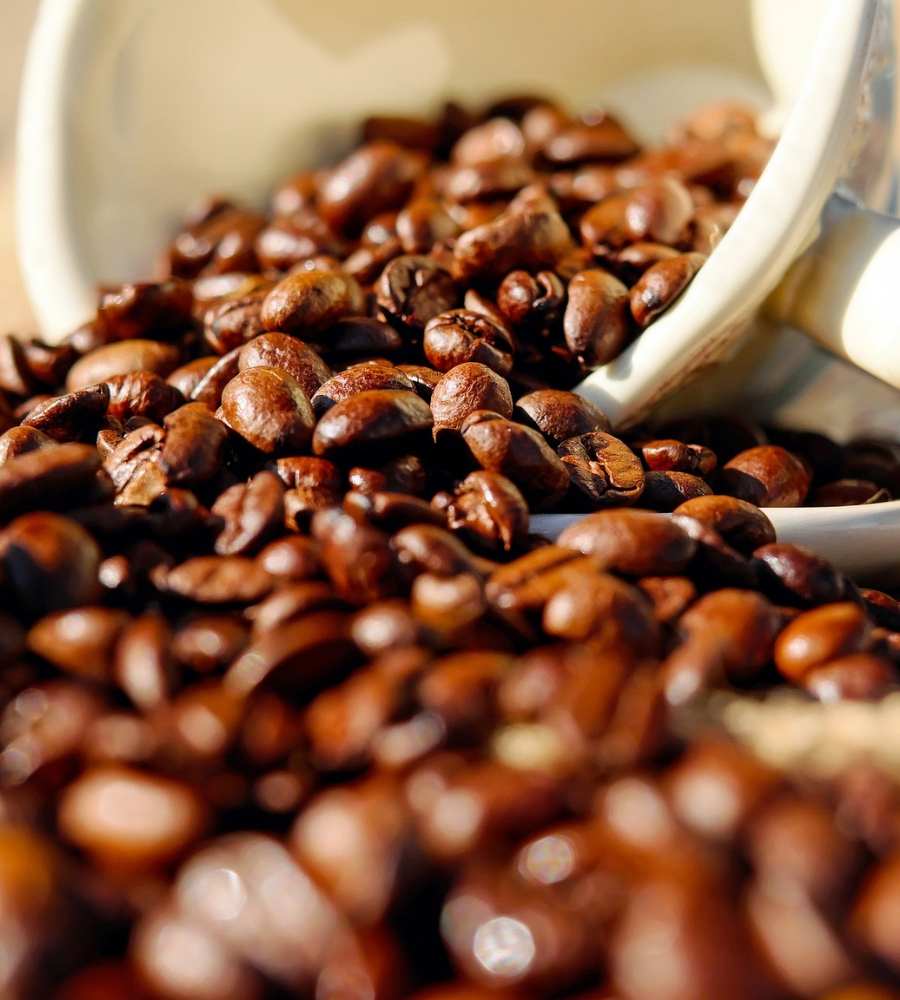 Some people are generally more sensitive to caffeine than others. While caffeine can be an energizer and booster for one person, others can feel jittery and nauseous after consuming it.

Some people are so sensitive that they may experience insomnia instead of a mild boost in energy like others.

Pregnant and breastfeeding women also choose to avoid caffeine since it can pass from their bodies into their child’s body.

It’s very interesting how some people can drink very high caffeine coffee and not feel a thing, whereas others might lose a night’s sleep with just a sip of regular coffee.

From the intestines, caffeine is very easily absorbed into the blood. It also crosses the blood-brain barrier into the brain very easily, and it can also cross the placenta into the fetus.

Once in the brain, caffeine binds to cells in your brain called adenosine receptors. Once the caffeine is bound to those receptors, adenosine – the actual target – can’t attach itself. Adenosine is one of the hormones which signal our bodies that it’s time to sleep. This is why caffeine can cause you to stay awake longer.

Caffeine is broken down by the liver and excreted through the kidneys. The effects of caffeine stay in your body for about 5 to 6 hours.

The enzyme used by the liver to break down caffeine is CYP1A2. Caffeine sensitivity is determined by how effective the enzyme is in your body.

CYP1A2 efficiency is determined by a few factors:

While the flavour of decaf coffee may not be quite the same as regular coffee, you’ll still enjoy the warmth and flavour. The only way to make sure you get the best tasting coffee is to buy freshly roasted beans, grind just before you brew, and use up all the beans in 10 days or so.

Decaf isn’t really that bad once you think about it: it’s still coffee, it’ll still make you go when you need to(you know what I mean), and it has much, much less caffeine than regular coffee.


I am half Italian and a lover of good coffee. I wanted to sell some of the coffee machines that I have come across from time to time as well as review some of the more popular ones on the market.

Finding the right machine to suit your needs can be a little tricky, hopefully, this website will help you make up your mind.

If you have any questions you can email me at