If you need a caffeine boost in the morning, you’re far from alone. Billions of people worldwide start their day with a caffeinated drink to get them up and ready for the day ahead. Brewing a tea or coffee first thing in the morning is a ritual performed by many people across the globe. It certainly is here at Barista Del Caffe, where we like to kick the day off with a steaming cup of rich, dark coffee.

But did you know that caffeine is a psychoactive substance? It’s actually the most commonly consumed psychoactive substance worldwide. It acts as a stimulant to the central nervous system, which is why regular consumption can lead to an actual physical addiction to the substance. Luckily, with 95 million cups of coffee, and 165 million cups of tea consumed each and every day in the UK alone, it’s not an addiction that’s likely to lead to criminal or antisocial behaviour. For this reason, it’s seen as one of the few socially acceptable dependencies.

Why is caffeine addictive? 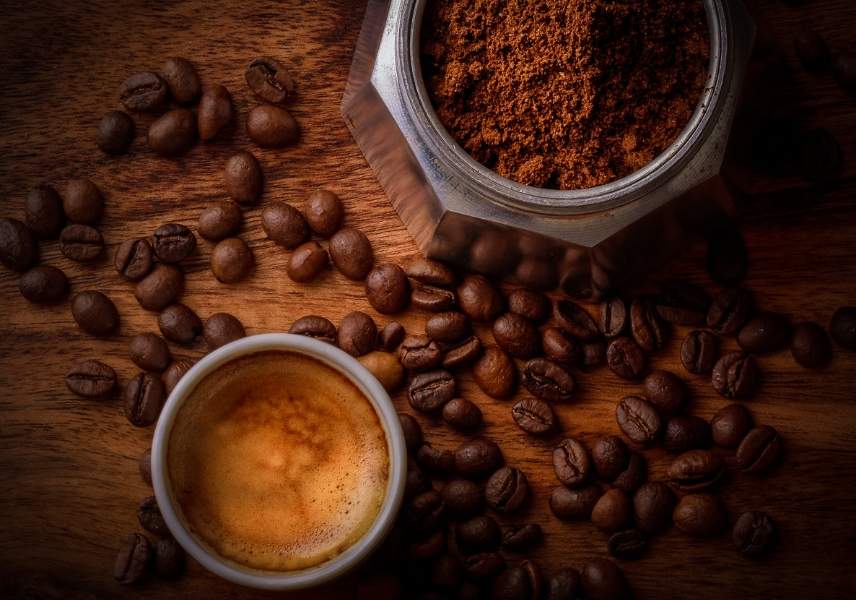 When you consume a drink or food that contains caffeine, it’s absorbed through the small intestine and dissolves into the bloodstream. Caffeine is both water and fat soluble, meaning that it is able to penetrate cell membranes, and so cross the blood-brain barrier to reach the brain.

Structurally caffeine is very similar to a substance called adenosine. It fits neatly into the receptors of adenosine A and A2A. Adenosine is a by-product of cellular activities, and stimulation of adenosine receptors leads to feelings of tiredness thus preparing the body for sleep. Caffeine blocks these adenosine receptors meaning that the levels of the neurotransmitters dopamine and norepinephrine, which are the body’s natural stimulants, continue at higher levels. These increased levels lead to increased heart rate and the release of glucose into the bloodstream. Meanwhile, the surplus adenosine also causes the body to secrete adrenaline, another natural stimulant.

As you may see, as Stephen R Braun, the author of Buzzed: The Science and Lore of Caffeine and Alcohol  writes, caffeine isn’t a stimulant in its own right, but is a stimulant enabler, that allows the body’s natural stimulants to run wild. The effects of the caffeine can start just fifteen minutes after consumption and last for between four and six hours.

Continued exposure to as little as 100mg of caffeine, or one cup a day, can be enough to create a physical dependence on the substance. This is because continued consumption of coffee leads the body to create more adenosine receptors in the central nervous system, which reduces the levels of stimulation created. This means that we become more tolerant of the caffeine and so more is needed to produce the same effect on the body. This increasing tolerance is also seen among other psychoactive drugs.

Most common sources of caffeine 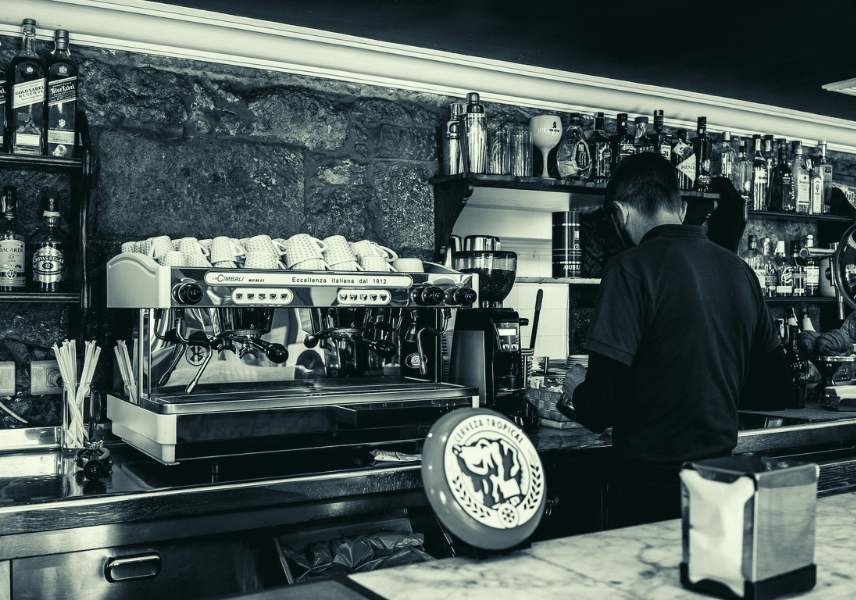 Unsurprisingly, the most common sources of caffeine worldwide are coffee and tea leaves. Cocoa beans, used to make chocolate are another source. And in many West African countries kola nuts, which are frequently chewed, and which were originally used to flavour cola, are another common source of caffeine consumption.

Caffeine levels can vary widely between different products. The highest levels of caffeine are found in so-called energy drinks, which can contain as much as 160 milligrams of caffeine. The average coffee (8 fluid ounces) contains 100mg of caffeine, although this can vary up to as much as 300mg dependent on the bean type, the roast, the brewing time, and how the coffee is served, e.g. an espresso or a latte. Tea contains 26.2mg for the same size drink. A bar of dark chocolate can contain up to 69.7mg of caffeine, with milk chocolate containing just 8.8mg on average.

It’s common to find caffeine in many cold and flu remedies, and even some painkillers contain caffeine as caffeine is both a mild painkiller in its own right, and can increase the effectiveness of other types of pain relief.

Caffeine can also boost your metabolism, aiding with weight loss, which is why it’s often included in fat-burning supplements. In terms of metabolism, caffeine can boost it by between 3% and 11%. According to studies, this is due to the increase of epinephrine, also known as adrenaline, which travels through the blood to fat tissues, causing them to break down fats and release them into the bloodstream.

There are a number of benefits to consuming caffeine. These include:

Read our more about the health benefits of coffee here

How much caffeine is in your drink?

Here we look at some of the most common hot and caffeinated drinks.

Except where otherwise stated, each drink is assumed to be 8 fluid ounces, or 236 ml in length, when brewed. Teas are assumed to have been infused in water for three minutes.

We all know when we’ve had too much caffeine. Whether it’s physically shaking, or feeling our heart pounding, it’s not a pleasant experience. We all have different tolerances too. For some one cup is too much, whereas others might consume eight or more caffeinated drinks per day without any ill effect.

Thos in the know recommend that we consume no more than 400 mg of caffeine per day, but have you ever wondered how much caffeine is in your beverage of choice? It might just surprise you. So, whatever your preferred choice, let’s find out. 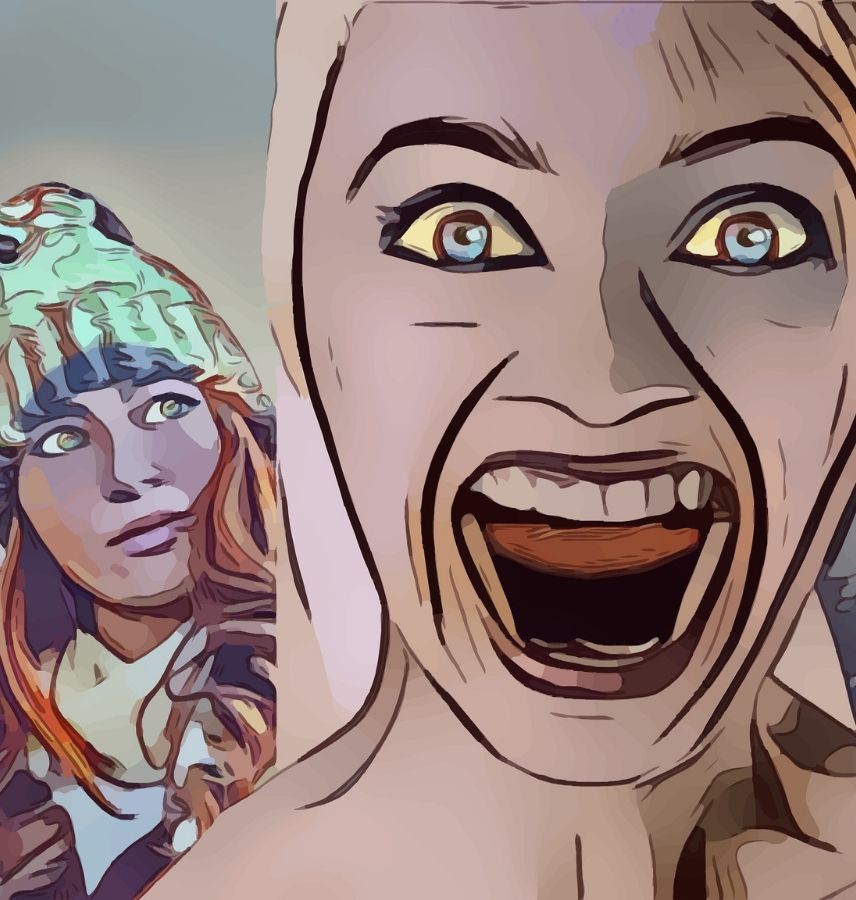 While it’s clear that caffeine consumers can enjoy a number of positive benefits from their caffeine hit, there are a number of other, less pleasant symptoms that come with over-consumption of caffeinated products. Such symptoms include:

Are you addicted to caffeine? 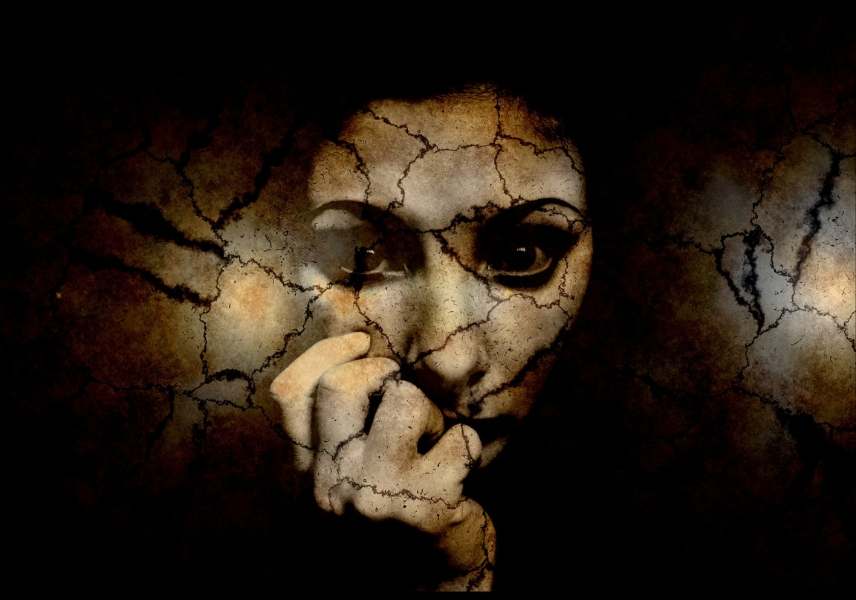 The vicious cycle of addiction happens with caffeine, just as it does with other addictive substances. As the effects of the caffeine wear off, you’re likely to experience a crash in energy. This leads to a feeling that you need another dose of caffeine to keep going.

If you’re worried about whether you might be addicted to caffeine, there are a number of simple questions you can ask yourself to assess whether you are at risk.

If your answers to these questions concern you, then it may be that you have a caffeine addiction, which you may wish to address.

What are the affects of Caffeine

This is a great infographic from eufic.org showing where you find caffiene and what are the affects. 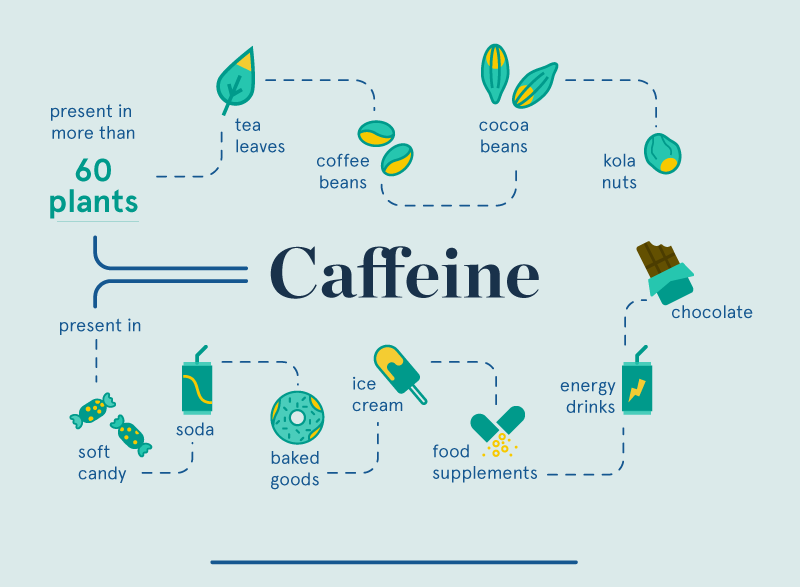 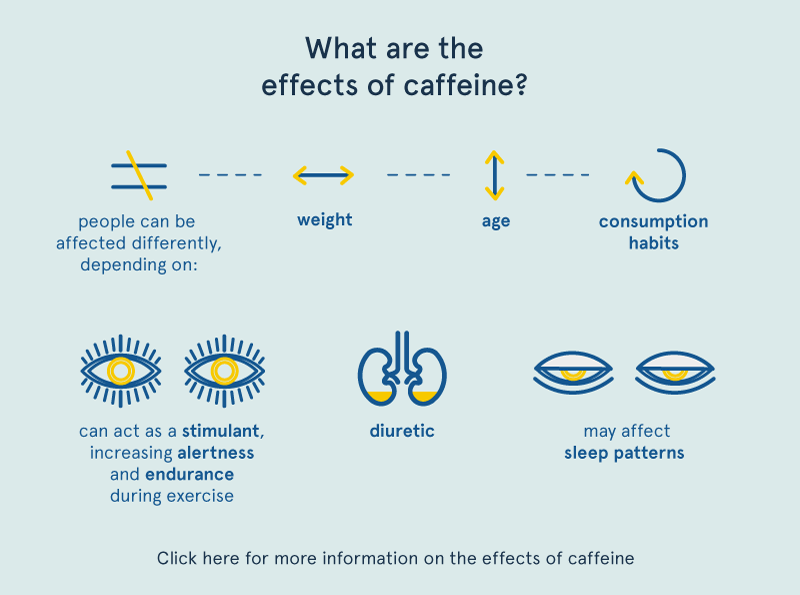 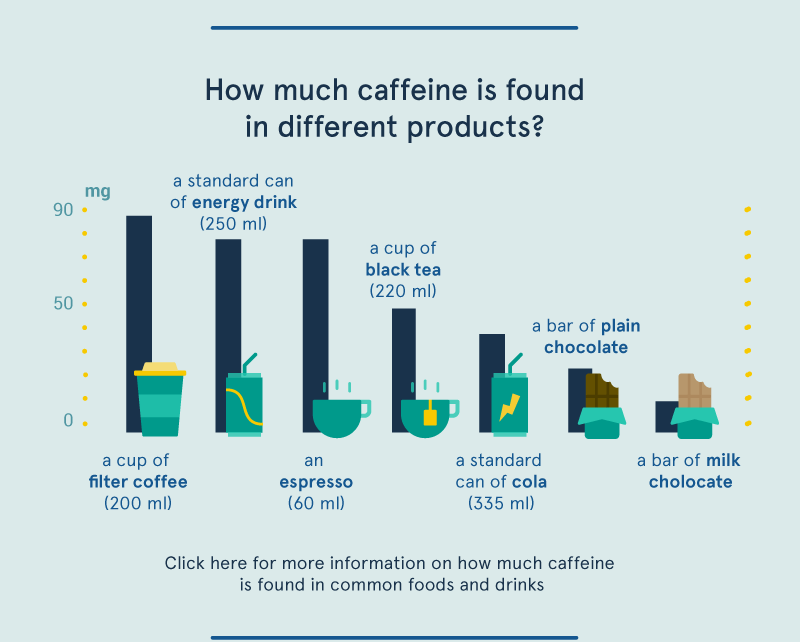 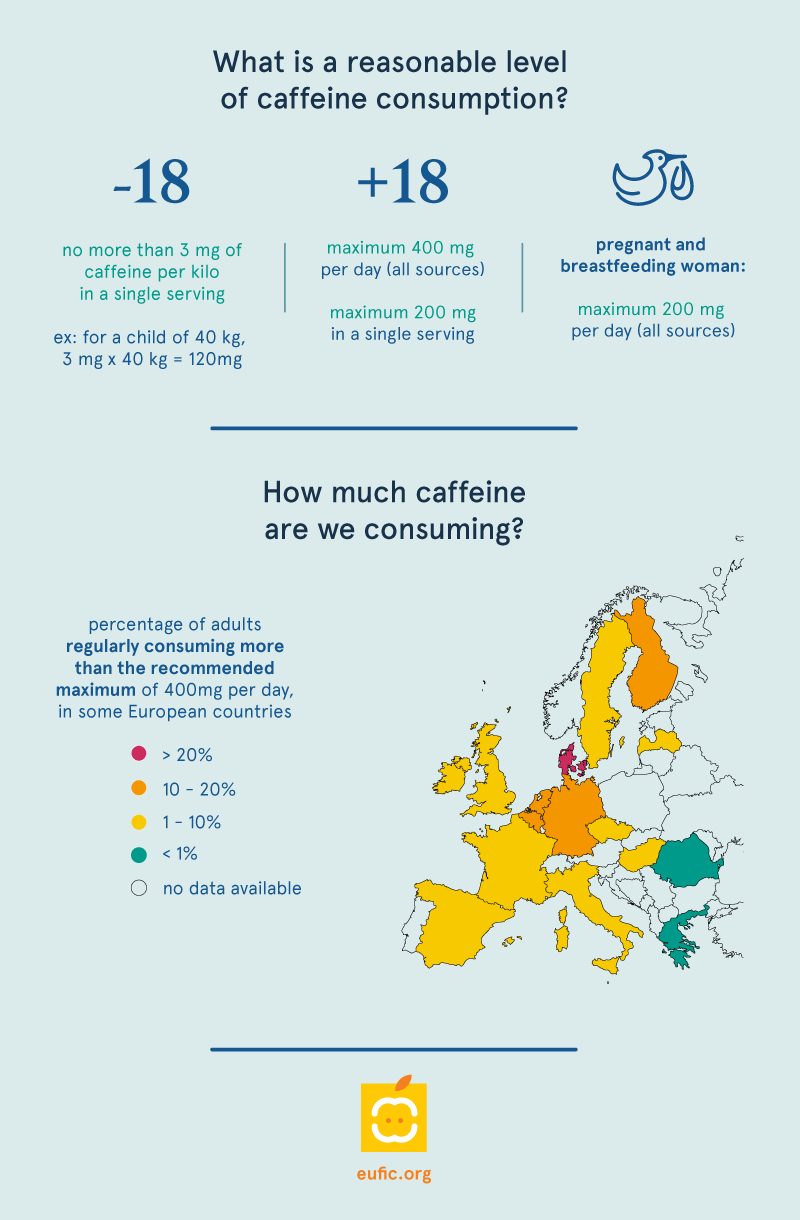 Caffeine addictions can produce symptoms that can be confused with a number of health conditions. This is particularly the case with mental health problems, such as anxiety disorders, as it intensifies the symptoms associated with worry and anxiety. It increases the possibility of racing thoughts, making it difficult or even impossible to relax, and can cause agitation, a racing heart, and shaking, all of which symptoms are commonly found in people with anxiety or who suffer from panic attacks.

Pregnant women are advised to avoid caffeine. There are a number of reasons. Pregnant women metabolise caffeine more slowly. It can increase blood pressure and heart rate and, as a diuretic, it leads to increased urination, which can lead to dehydration. In addition, caffeine crosses the placenta, and developing babies are unable to fully metabolise caffeine which studies suggest may lead to lower birth weights.

Studies on animals have shown that caffeine can have a detrimental effect on the foetus, such as causing defects, or premature labour. However, there are no conclusive studies when it comes to humans. It is probably better to err on the side of caution, however, with experts recommending that pregnant women limit their intake to no more than 200mg per day.

There are a number of symptoms associated with caffeine withdrawal if you consume at least two cups of coffee a day. This is because the brain is used to operating with an artificially raised number of adenosine receptors and a decreased number of norepinephrine receptors, which depend on regular consumption of caffeine. Suddenly, without caffeine, the altered brain chemistry causes a range of problems.

Research by Professor Roland Griffiths, professor of neurology at John Hopkins, has suggested that as many as 50% of regular coffee drinkers experience withdrawal symptoms within as little as 12-24 hours of giving up the beverage. Symptoms peak between 20-48 hours after last consumption, and can last up to nine days. During this time the brain will reset the adenosine receptors from the elevated numbers to baseline levels. 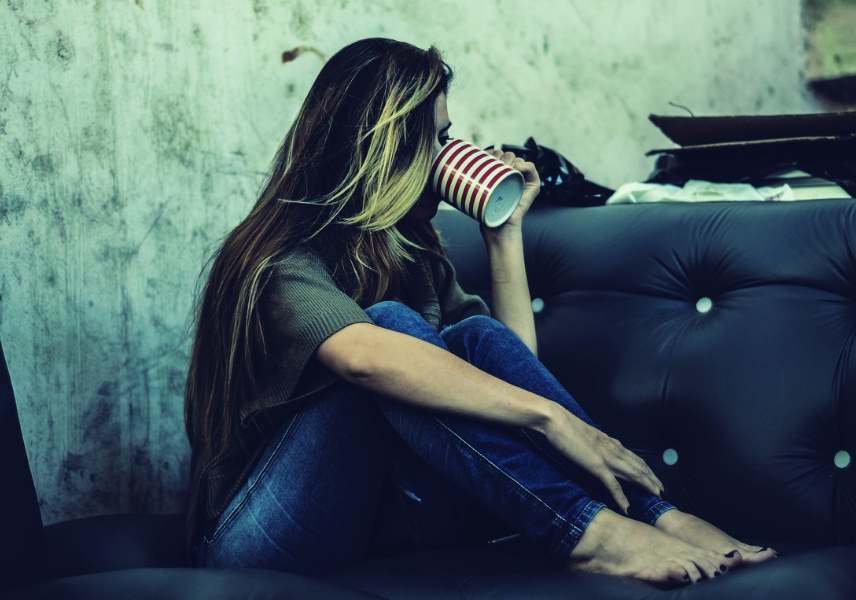 The most common symptom is a headache, which can be severe and intense. This is because caffeine constricts the blood vessels. Without caffeine, they dilate, increasing the blood flow to the brain. This can cause headaches that similar in severity to migraines.

People going through caffeine withdrawal often feel very tired and perhaps even drowsy, as adenosine is now able to reach the receptors. People withdrawing from caffeine may also find themselves experiencing changes in mood, and may find it difficult to concentrate or focus.

In extreme cases, people withdrawing from caffeine consumption can also experience flu-like symptoms, such as nausea and vomiting, muscle pain, and stiffness. 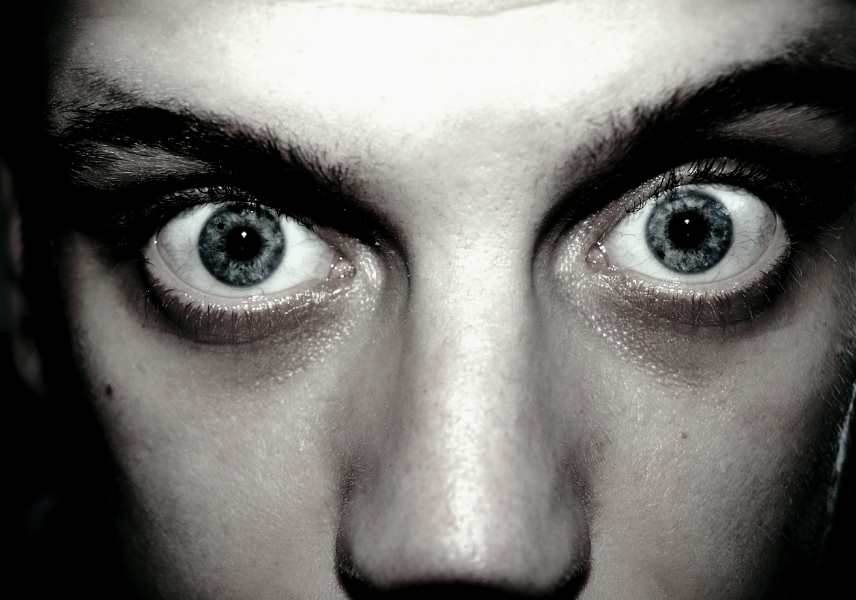 As with other drugs, the advice when it comes to caffeine is to cut down slowly rather than going ‘cold turkey’, as this 2019 study shows  It recommends that you slowly reduce caffeine consumption over a six week period.

Begin by reducing your intake by a single cup a day, or switching one to decaffeinated, and gradually reduce the amount of cups you’re drinking. Try making your drinks weaker too, or mixing decaf with your regular drinks, so that you’re getting less caffeine from each one.

While there are certainly worse addictions than caffeine, over-consumption of caffeine can lead to a physical dependency on this psychoactive drug. Too much caffeine can cause you to feel ill, and can mimic or exacerbate some health conditions, particularly when it comes to mental health.

If you feel that your caffeine consumption is a problem, then slowly reducing your intake over a period of weeks will help prevent you experiencing caffeine withdrawal symptoms, which can be unpleasant.


I am half Italian and a lover of good coffee. I wanted to sell some of the coffee machines that I have come across from time to time as well as review some of the more popular ones on the market.

Finding the right machine to suit your needs can be a little tricky, hopefully, this website will help you make up your mind.

If you have any questions you can email me at